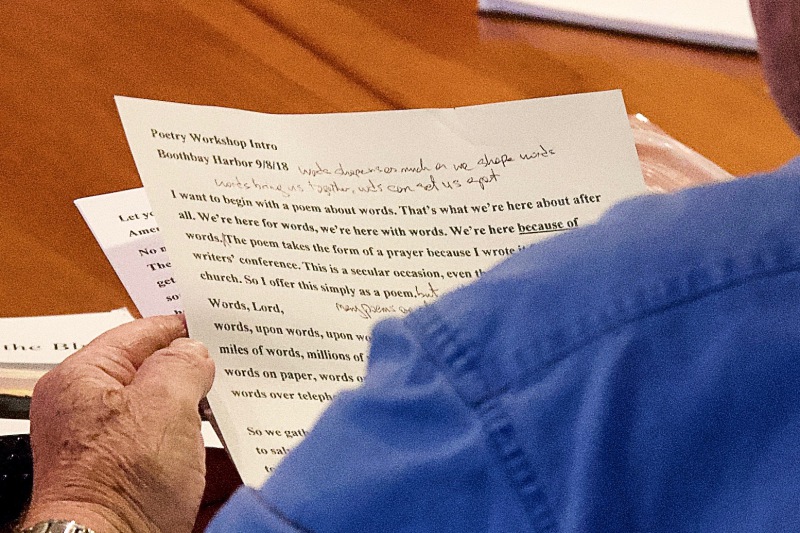 In 1997 Jean Webster, a poet and Lincoln Arts Festival board member established a poetry program in the region. The first year poets from New York presented a program. Their leadership created an enthusiasm among local people who write poetry, and over the years the poetry workshop has continued to thrive.
Although a workshop is not planned for the summer of 2022, in recent years workshops have been led by Betsy Sholl, Poet Laureate of Maine 2006 - 2011 and winner of Maine's Literary Award for Poetry in 2015; Stuart Kestenbaum, 2020 Poet Laureate of Maine; Richard Blanco, inaugural poet at Obama's second innauguration; Carol Bachofner, Poet Laureate of Rockland, Maine 2012 - 2016; and J. Barrie Shepherd, 2006 winner of the Lifetime Achievement Award of the Presbyterian Writers' Guild.

This gift of words -

words to say with, words

to play with, words to repay

the grateful debt of education,

inspiration and attention with - is a gift

demands to be declared as neutral ground,

upon which all sides can venture,

trespass, even build together.

So here I stand casting my spells,

of fresh-cut bait, all trimmed with the here-

repetition too, those oldest cunning ways

to lure a listener beyond his element

into breathing a new air, free and fluid

as the frantic fling of life itself.

From: "If You Don't Have Twenty Minutes Don't Stop!"

used with the permission of the poet